Home » How To Change Guitar Strings

At some point, all guitarists need to learn how to change the strings on their guitar. Sometimes you’ll be forced to change one when a string snaps. But usually, you’ll simply want to change them, as strings lose their brightness and wear out.

The amount of time you leave between change strings varies depending on several factors. If you play your guitar regularly, then you might like to change your strings once a week or once a month.

Most Professional guitarists tend to change their strings before each gig. But in the end, it all comes down to a matter of personal preference. Something to bear in mind if you’re using your guitar for a gig, is that your strings need a few hours of play to break in properly. During this time, your strings will go out of tune as they stretch so you’ll have to retune.

Anyway, here’s what you do:
Remove the old strings by detuning the machine heads until the tension becomes loose enough to allow you to pull each string away from the headstock.

Another quick way to remove the old strings is to snip them using a pair of wire cutters. Be very careful if you do it this way, and make sure they are loose, since the bare ends of the strings can be sharp and easily flap around. Bare guitar strings are amongst the many things you DO NOT want to catch in your eye.

How you go about installing your new strings will usually depend on the type of guitar you have, as many guitars have slightly different methods. However, the strings are usually held in place at one end by fixtures behind or on the bridge, and at the other by turning the machine head on the headstock.

Here’s a small insider tip guitarists have been using for years to get more life from your steel strings once you’ve removed them: Boil them.

Dropping a set of strings into a pan of boiling water for 10 to 15 minutes will remove a lot of the grimy build up and bring a new life back to what would otherwise be lifeless strings.

It won’t last for very long, and you can’t get away with doing it too many times, but it can be an effective temporary measure.

I wouldn’t suggest you rely on this technique too much, strings aren’t too expensive – and using new strings saves you a lot of hassle.

Regardless of what kind of guitar you have, your strings need to be stretched after you’ve put them on. When you first tune your guitar, put your hand under each string around the pickup area, pull the string a few centimeters away from the fretboard, then release it. If the pitch has dropped, retune and repeat the process. Keep doing this until all the strings stay in tune.

On most electric guitars the strings are either secured at the bridge end by an independent tailpiece (like most Gibson guitars), or passed through the body of the instrument from the back into an all-in-one bridge unit (like most fender style guitars).

At one end of every steel string, you will find a tiny disc of metal around which one end of the string is wrapped. This is called the ball end.

Take the opposite end of the string and thread it through the fixture at the bridge.

Pull the string through until the ball end stops you from pulling the string any further.

Most electric and steel-string guitars use a similar system for securing strings at the machine head. The capstan to which the string is attached stands out vertically from the headstock. Strings can be passed through a hole in the side of the capstan.

The end is then passed around and under, trapping it in place when the machine head is tightened. Some capstans have vertical slots instead of holes. To use these, cut the string to length, and insert into the tip of the capstan. Then bend the string to one side and wind it around.

This leaves the string endings neat and tidy.
Here’s what you do next: Slowly turn the machine head for each string, increasing the tension until the string becomes suitably tight.

To save yourself time and energy, you can use a cheap plastic string winder, which simply fits over the machine head allowing you to crank it along more quickly. 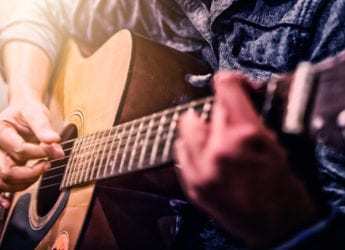 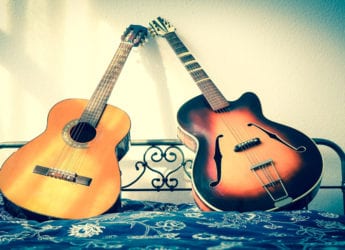 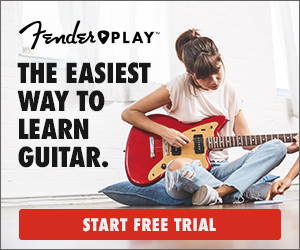 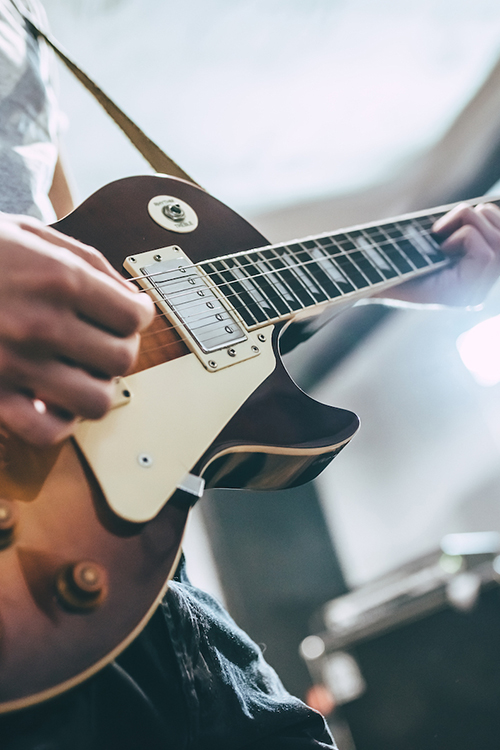